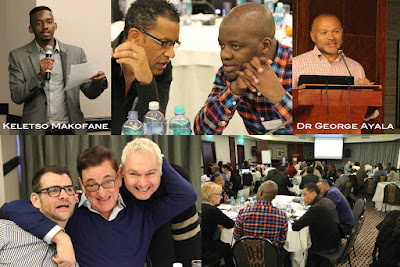 August 3-4, 2015 (Johannesburg, SA) The MSMGF co-hosted a workshop of advocates, government officials, healthcare providers and public health practitioners from twelve African countries.(Angola, Botswana, Cameroon, Ghana, Kenya, Malawi, Mozambique, Nigeria, South Africa, South Sudan, Swaziland, Zimbabwe) Regional advocates discussed the HIV needs of men who have sex with men (MSM) with their government officials, armed with guidelines by the World Health Organization (WHO). In some instances, this is the first time advocates sat across the table with government officials in their respective countries.

Participants were also briefed on the latest developments in the Global Fund to Fight Aids, Tuberculosis and Malaria (the GlobalFund), and the United States President's Emergency Plan for AIDS Relief (PEPFAR). These organizations are the two largest funders of HIV programs in Africa. Recently, both organizations have opened up their processes to ensure that the voices of communities of people most affected by HIV, including MSM, are adequately engaged in funding decisions and in HIV programs.

“We have a groundbreaking opportunity to scale-up high quality sexual health services for MSM in Africa”, said Dr. George Ayala, executive director of the MSMGF, “We have sound technical guidance from the WHO, as well as a wealth of program experience from community-led organizations around the world. These have been used in developing a practical guidance for implementing WHO recommended interventions, which we discussed at the meeting. With support from UNFPA, UNDP, and the WHO, the implementation tool for MSM, also known as MSMIT, will be formally launched in the next few weeks.”

“In past years, the focus of advocacy by MSM was to have the burden of HIV in our community recognized in the international HIV response. Today there is some recognition, and our task now is to implement programs to end HIV through partnerships between civil society, governments, donors and implementers. Last week’s meeting aimed to facilitate these partnerships”, said Keletso Makofane, Senior Programs and Research consultant, based in Johannesburg, South Africa.

MSMGF co-hosted the meeting on evidence-based HIV responses for men who have sex with men in Sub-Saharan Africa in collaboration with Anova Health Institute, COC Nederland, African Men for Sexual Health and Rights (AMSHeR), AVAC, theWorld Health Organization (WHO), with support from the U.S. Centers for Disease Control and Prevention (CDC), the USAID/FHI 360 Linkages Program, and the Bridging the Gaps Program through COC Nederland.

About MSMGF: MSMGF has worked since its founding in 2006 to encourage targeted, tailored, better-resourced, and rights-based sexual health services for gay men and other men who have sex with men (MSM) worldwide, through its advocacy and technical support work. As a global network, MSMGF has successfully influenced HIV responses at the local level through shifts in global- level policies and has effectively utilized public health as an entry point for advancing the human rights of LGBT people. MSMGF currently supports programs in 15 countries.