Youth advocate Thu Yain shares his experience of attending The MSMGF Pre-Conference and this year's International AIDS Conference. Thu is a member of The MSMGF's Youth Reference Group and board member at Youth LEAD in Singapore. 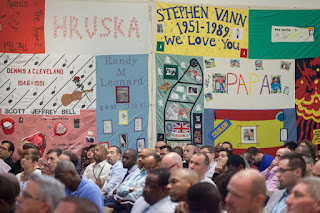 AIDS 2012 was the first international conference that I have ever attended. It was also the longest trip that I have taken in the past 26 years of my life. I was very excited to be given the chance to attend a huge scale event with so many learning opportunities.

I started my week long stay with The Global Forum on MSM & HIV (MSMGF) for their Pre-Conference entitled, From Stigma to Strength: Strategies for MSM, Transgender People and Allies in a Shifting AIDS Landscape. The Pre-Conference was a day long affair to discuss issues affecting men who have sex with men (MSM) and Transgender (TG) people, and how we can move forward as a community in the HIV/AIDS response. I was most interested in the young MSM (YMSM) related sessions.

One thing that impressed me when I entered the conference hall was the handmade quilt for those who have died from HIV. It was part of a project called Quilt in the Capital. I was interested in the numerous quilts displayed around FHI 360, the conference venue. Each quilt paints a personal story about someone who has perished from the disease.  These quilts remind me that for each positive person, there are many other loved ones who are affected by their loss. The HIV/AIDs movement is felt by everyone because the virus never discriminates. These quilts encourage me to keep fighting on, to advocate about HIV/AIDS, and hopefully end HIV discrimination one day.

From the YMSM break-out session that I attended, I realized that there are many other young leaders around the world who work for their own communities. The issues affecting each country and region were cross-cutting and similar. For example, many young gay and bisexual men live in conservative societies and face barriers in coming out safely and seeking sexual health services due to stigma and discrimination. There is also lack of data on YMSM, making it harder to reach out to the funders to support existing YMSM-specific services and initiate new programmes. The government does not understand the importance of reaching out to key affected populations. We need to work hard to develop strong data on YMSM, which is aggregated by sub groups such as age, racial groups, socio-economic status, etc.

With data, there is good evidence to prove to government, funders, and other stakeholders that YMSM are one of the most vulnerable groups, and that they need the most support and assistance. Homophobic bullying still exists in schools around the world. This greatly affects the self-esteem of young men, potentially leading to suicidal thoughts. Many YMSM thus do not feel the need to care for their own health and future. This also affects YMSM judgment, resulting in lack of negotiation skills when engaging older and commercial partners for safe sex to protect themselves.

These issues and barriers were again echoed during the MSMGF Youth Reference Group’s (YRG) meeting. The MSMGF Youth Reference Group helps advise and coordinate the work of the MSMGF on YMSM issues. Each of the young leaders in the YRG highlighted how YMSM are still vulnerable and need more support in the HIV/AIDS response. Globally, the issues that were raised - stigma & discrimination, lack of specific YMSM data, and the need to build leadership for YMSM - were shared by all members at the breakout session. There was slight variations based on the unique local cultures and characteristics, but, not everything was negative. It was very encouraging to find out that various programmes and services were already running in certain communities, and that these programmes were reaching out and serving YMSM. For example, there are great information, education, and communication (IEC) materials in Ireland. The photos they use are actual young people from the community, and have language that is youth-friendly. This reaches out to YMSM easily as they are able to identify themselves with their peers in the photos. The friendly, accessible messages are also easily understood by young people.

Although YMSM are a young key-affected population, we must not forget that there are other young vulnerable persons. This message was given to me when I assisted in the session hosted by Youth LEAD, Asia-Pacific Network of Young Key Affected Populations (YKAP). This interactive session was held in the Youth Pavilion. Engaging games allowed the participants to understand the issues affecting YKAP, including YMSM. The ecological model of YKAP is a useful tool to understand the roots of problems, and the way various factors interrelated and affect the HIV/AIDS response, enabling us to tackle each issue in a systematic way.

AIDS 2012 inspired me to work hard in achieving my goals of building an inclusive, safe environment for YMSM. I want to see a society that does not judge people by their sexuality or sexual preferences. Although there will always be hurdles to overcome, we are never alone in this fight. I will always believe in our work, and that the rest of society will eventually understand us. With hard work, I trust we can achieve our dreams and hopes.

Thu Yain was born in Myanmar, but has called Singapore his home since he was 8 years old. He has been a HIV/AIDS advocate for the past two years. He believes that every young person, especially young gay and bisexual men, should be equipped with comprehensive sexual knowledge, and have affordable access to sexual health services.

Thu has attended training in the field of HIV/AIDS and young vulnerable/most-at-risk people conducted by UNICEF, UNFPA, and UNESCO. He also completed a course in delivering quality technical assistance in advancing human rights and gender equality in HIV response offered by UNAIDS, ActionAid and TSF South Asia. He recently served as a workshop reviewer for AIDS 2012.

Thu is a member of Youth Reference Group with The Global Forum on MSM and HIV. He is currently serving as a Board Member of Youth LEAD, a regional network of young HIV/AIDS activists in Asia-Pacific. He is also a focal point for Youth Voices Count, a network of young MSM and TG concerned about HIV/AIDS in Asia-Pacific. Locally, he is a Senior Executive with SGRainbow, a social group for young gay and bisexual men in Singapore.